Not at all Hygge

Not at all Hygge. So I've been reading quite a bit, recently, on hygge. You probably know (apparently, it's quite passe now) that hygge is the Danish way of living and enjoying the simple things and making the ordinary 'extraordinary'. And it involves lighting and cosiness and togetherness and all kinds of things. Well, last week was the very antithesis of all hyggerly things.  It started with the rain and my Dad's departure back to Spain. That wasn't meant to rhyme. I had been rather dreading his leaving, since I've enjoyed his company, felt less lonely in the house during the day, and also had help with the childcare. I didn't have to do the dreaded school run alone, with the two bairns in tow. Well, I was right to dread it. I was probably wrong not to dread it more.  I don't know what it was, but there seemed to be a pact between the school and the weather that every school pick-up and drop-off would be peculiarly timed with a downpou
Post a Comment
Read more 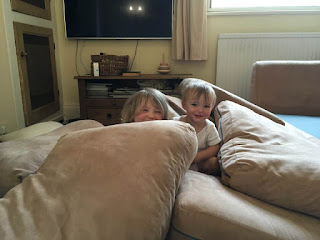 Overdid it, Underdone it

Back on the Blogging

Lists and Lists of Lists.

The clocks have sent me backwards

Dead flowers and other such things

Got the clutterbug bug